The ghost gum, Eucalyptus Papuana, which grew outside the Railway Station, earned its claim to fame as the founding site of the political movement we now know as the Australian Labor Party. In 1891 Barcaldine was the centre for the striking shearers during the “Great Shearers Strike” when they met under its boughs. In May 1891, about 3000 striking shearers marched under the “Eureka” flag to put forward their protests against poor working conditions and low wages. Because the area beneath the Tree of Knowledge was the scene of actions and decisions which had a profound effect on the future of labour and politics in Australia, it has become an icon of the Labor Party and Trade Unions.

The Tree of Knowledge was included in the National Heritage List on 26th January 2006. In 2006, the tree was fatally poisoned and after its death the Tree's remains were taken to Brisbane where it underwent a world's first preservation process. It was then returned to Barcaldine and placed under the Award winning timber struture, designed by Brian Hooper and Michale Laverty. The Structure is comprised of 4,913 individual timbers, 3,449 of which are hung to give the illusion of a canopy over the Tree. The Tree now serves as an important place to meet and reflect, and remember those who fought for better working conditions.  The best view of the Tree and the Memorial is at night when it is beautifully lit by special lighting. 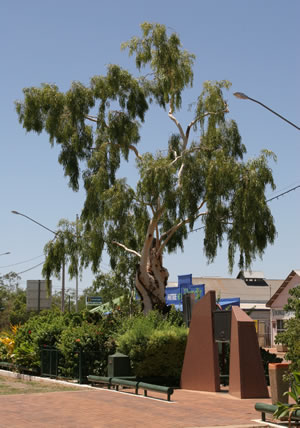 The Tree of Knowledge prior to its
demise in 2006